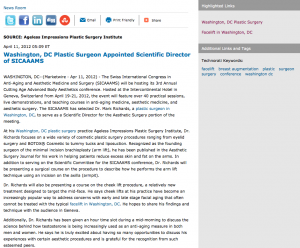 Washington, DC — The Swiss International Congress in Anti-Aging and Aesthetic Medicine and Surgery (SICAAAMS) will be hosting its 3rd Annual Cutting Age Advanced Body Aesthetics conference. Hosted at the Intercontinental Hotel in Geneva, Switzerland from April 19-21, 2012, the event will feature over 40 practical sessions, live demonstrations, and teaching courses in anti-aging medicine, aesthetic medicine, and aesthetic surgery. The SICAAAMS has selected Dr. Mark Richards, a plastic surgeon in Washington, DC, to serve as a Scientific Director for the Aesthetic Surgery portion of the meeting.

At his Washington, DC plastic surgery practice, Dr. Richards focuses on a wide variety of cosmetic plastic surgery procedures ranging from eyelid surgery and BOTOX® Cosmetic to tummy tucks and liposuction. Recognized as the founding surgeon of the minimal incision brachioplasty (arm lift), he has been published in the Aesthetic Surgery Journal for his work in helping patients reduce excess skin and fat on the arms. In addition to serving on the Scientific Committee for the SICAAAMS conference, Dr. Richards will be presenting a surgical course on the procedure to describe how he performs the arm lift technique using an incision on the axilla (armpit).

Dr. Richards will also be presenting a course on the cheek lift procedure, a relatively new treatment designed to target the mid-face. He says cheek lifts at his practice have become an increasingly popular way to address concerns with early and late stage facial aging that often cannot be treated with the typical facelift in Washington, DC. He hopes to share his findings and technique with the audience in Geneva.

Additionally, Dr. Richards has been given an hour time slot during a mid-morning to discuss the science behind how testosterone is being increasingly used as an anti-aging measure in both men and women. He says he is truly excited about having so many opportunities to discuss his experiences with certain aesthetic procedures and is grateful for the recognition from such esteemed peers.

Going into the upcoming conference, Dr. Richards states that he looks forward to the other presentations that will be delivered by plastic surgeons from across the world. He says he hopes to bring back a wealth of new information, techniques, and patient education tools to help improve the results of his procedures, whether it be a facelift, armlift, or breast augmentation in Washington, DC. Dr. Richards adds that he hopes attendees at the conference observe his continued efforts to promote the highest standards of ethical and safe treatment as well as ensure patients receive the best care and results possible. “At premier international conferences such as these, the bias of a single country’s approach to aesthetic problems is eliminated, and ‘out of the box’ thinking stimulates me to find newer and better ways to restore a natural beauty to my clients. In a way, these conferences serve as an incubator for creative approaches to old problems.”