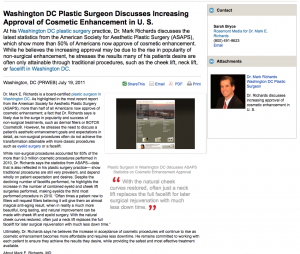 At his Washington DC plastic surgery practice, Dr. Mark Richards discusses the latest statistics from the American Society for Aesthetic Plastic Surgery (ASAPS), which show more than 50% of Americans now approve of cosmetic enhancement. While he believes the increasing approval may be due to the rise in popularity of non-surgical enhancement, he stresses the results many of his patients desire are often only attainable through traditional procedures, such as the cheek lift, neck lift, or facelift in Washington DC.

Dr. Mark E. Richards is a board-certified plastic surgeon in Washington DC. As highlighted in the most recent report from the American Society for Aesthetic Plastic Surgery (ASAPS), more than half of all Americans now approve of cosmetic enhancement; a fact that Dr. Richards says is likely due to the surge in popularity and success of non-surgical treatments, such as dermal fillers or BOTOX Cosmetic®. However, he stresses the need to discuss a patient’s aesthetic enhancement goals and expectations in detail, as non-surgical procedures often do not achieve the transformation attainable with more classic procedures such as eyelid surgery or a facelift.

While non-surgical procedures accounted for 83% of the more than 9.3 million cosmetic procedures performed in 2010, Dr. Richards says the statistics from ASAPS—data that is also reflected in his plastic surgery practice— show traditional procedures are still very prevalent, and depend wholly on patient expectation and desires. Despite the declining number of facelifts performed, he highlights the increase in the number of combined eyelid and cheek lift surgeries performed, making eyelids the third most performed procedure in 2010. “Often times a patient new to fillers will request fillers believing it will give them an almost magical anti-aging result, when in reality a much more beautiful, long lasting, and natural improvement can be made with cheek lift and eyelid surgery. With the natural cheek curves restored, often just a neck lift replaces the full facelift for later surgical rejuvenation with much less down time.”

Ultimately, Dr. Richards says he believes the increase in acceptance of cosmetic procedures will continue to rise as cosmetic enhancement becomes more affordable and requires less downtime. He remains committed to working with each patient to ensure they achieve the results they desire, while providing the safest and most effective treatment available.

Ageless Impressions is located at 11300 Rockville Pike Ste. 912 in N. Bethesda, MD 20852, and can be reached at (301) 468-3458, or found online at plastic-surgeon.us or the Ageless Impressions Plastic Surgery Institute Facebook page.